Fisherfolk activists belonging to the fisherfolk alliance Pambansang Lakas ng Kilusang Mamamalakaya ng Pilipinas (Pamalakaya) on Friday warned the Department of Energy (DoE) of a major environmental catastrophe in Palawan and neighbor Spratly islands once it allows the United Kingdom oil and gas exploration group to proceed off the waters of Palawan province near the disputed Kalayaan group of islands.

“The project is heading us to a major environmental catastrophe in the making. Imagine 880,000 hectares of marine waters will be sacrificed anew for this extreme greed of powerful corporations for super profits at the expense of national patrimony, people’s rights to livelihood, and sound and sustainable environment,” Hicap lamented.

The Pamalakaya leader said the offshore mining activity might result to huge decline in the production of fishes and other marine products in the country. Hicap said offshore mining in the Visayan Sea and Palawan alone could lead to decline of year fish production by 600,000 metric tons or 20 percent decline annually, and it would affect the livelihood of not less than 100,000 fisherfolk and the 500,000 people largely dependent on fishing as means of livelihood.

Forum Energy said the service contract they obtained from DoE is within 200 nautical miles of the country’s Exclusive Economic Zone (EEZ) based on Republic Act 9522, or the Philippine Archipelagic Baseline Law passed by Congress last year.

Citing the impacts of oil and gas exploration of Japan Petroleum Exploration Co. Ltd. (Japex) in Tanon Strait, a protected seascape separating the island provinces of Cebu and Negros, Pamalakaya said fish catch was drastically reduced by 67 to 75 percent from a high of 15-20 kilos average catch per day to 3-5 kilos of fish per day due to offshore mining.

In a fact finding mission conducted two years ago, Pamalakaya said fish skills occurred in several barangays in Cebu and Negros during and after the seismic surveys. The militant group also cited previous studies on the effect of offshore mining which said that an oil exploration activity generates 214,000 pounds of air pollution every year, 50 tons of nitrogen oxides, 13 tons of carbon monoxide and 6 tons of sulfur dioxide and 5 tons of volatile organic hydrocarbons.

This is not the first time oil and gas exploration activity will be conducted in Reed Bank. The bank has been subject of numerous exploration hunts in the past under the Philippine contractual regime and Presidential Decree 87. The first petroleum contract in the area was awarded by the then Ministry of Energy in 1975.

Forum Energy holds a 70-percent stake in GSEC 101, which is the company’s principal asset, while Monte Oro Resources & Energy Inc. owns the rest. The government initially awarded GSEC 101 to Sterling Energy Plc in June 2002. Sterling drilled four wells at the southwest end of the structure. Two of the wells tested gas at rates of 3.6 million cubic feet and 3.2 million cubic feet per day, respectively. With reports from Akihira Tatchu 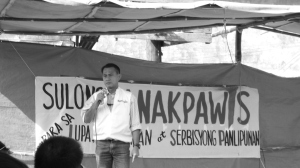 Anakpawis Rep. Joel Maglunsod had authored a resolution seeking an investigation on impacts of offshore mining in Visayan Sea