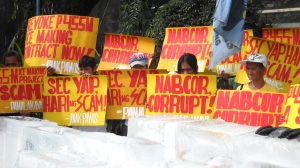 “Definitely we will challenge the decision of the Commission on Elections before the highest court of the land. The fight against unlawful and immoral claim of Mr. Yap to represent the third congressional district of Bohol will be vigorously pursued in any appropriate court, in the parliament of the streets and in the court of public opinion. There’s no turning back,” the Pamalakaya leaders said in a joint statement.

Hicap and France, the petitioners to the Supreme Court move will be presided by the filing of motion for reconsideration before the Comelec, and if the poll body rejected the motion, they will elevate the case before the high tribunal for proper legal disposal of the disqualification case.

“It is going to be lifetime nightmare for Secretary Yap unless this most favored Cabinet member of President Gloria Macapagal-Arroyo atone for his political, legal and moral follies and pay for his crimes against the Filipino public,” the Pamalakaya leaders said.

Pamalakaya is now preparing a people’s petition urging senators and congressmen of incoming Congress to investigate Yap on charges of big time corruption in the Department of Agriculture under his watch as secretary of the department.

“It is going to be addressed to the next Senate President and House Speaker of the House of Representatives. Imagine, Secretary Yap, the congressman of Bohol third district is being called to answer charges of top notch crimes of corruption,” the group said.

On January 6, Pamalakaya filed a plunder case against Sec. Yap and President Arroyo in connection with the P 455 million ice making fund scam, which the group said was overpriced by 100 percent per unit. Pamalakaya said Yap and other officials of National Agribusiness Council (NABCOR) should also be investigated on the P 7.14 billion which the Commission on Audit (COA) cited in its’ 2008 report was missing, diverted or bungled.

The Second Division of Comelec last week junked the disqualification case filed by the group.

“After thorough examination of the proofs presented by both parties, we are convinced that Respondent Yap has met such requirement. The term “residence” is to be understood not in the common acceptation as referring to “dwelling” or “habitation” but rather to “domicile” or legal residence, that is, “the place where a party actually or constructively has his permanent home, where he, no matter where he may be found at any given time, eventually intends to return and remain,” the Comelec second division said.

The poll body further said: “It has been established that the domicile of origin of the respondent is in Metro Manila. When respondent Yap decided to make Loboc, Bohol as his residence, such a decision did not begin and end by his intimation to Judge Fernandez of his intention. In 2007, Yap was laying the groundwork for his transfer to the said municipality.”

The Comelec said Yap visited local government officials and neighboring towns whenever his regular visits to the place permitted him. The election body said Yap’s intention was made clearer when he finally purchased the house of his mother-in-law in Barangay Buenavista in Loboc, Bohol.

“Although property ownership is not an indicia of domicile, the fact that the respondent bought the property wherein he resides adds to his foothold to the municipality. His attendance in barangay assemblies as member of barangay is indicative of his desire to integrate himself in the community,” the poll body added.

The Comelec noted that Yap’s contributions in the community were recognized when he was conferred the title “adopted son of Loboc, Bohol by way of Resolution No. 131 adopted on October 24, 2005. The commissioners said the law does not state that in abandoning his domicile, the candidate must divest any and all of his properties and interest attached to his previous domicile.

“His electoral victory is a product of political horse trading, highly questionable and totally ridiculous. We will explore all legal remedies to stop Sec. Yap from misrepresenting the third district of Bohol and use his illegally acquired position to get away with high crimes of corruption he committed during his tenure as chief of the agriculture department,” Pamalakaya said. #